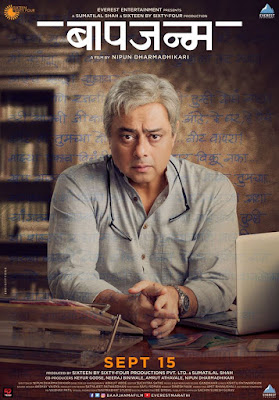 "Sachin Khedekar" the most talented versatile actor from Indian film industry who has proved his mettle every now and than will be seen in a lead role in an upcoming Marathi movie "Baapjanma". As per recent report it is said that the movie is a tribute to fatherhood.

The movie is directed by debutant director "Nipun Dharmadhikari" who has been on Fobers magazine for reviving century-old sangeet-nataks (musical dramas) . The movie is backed by Sumatilal Shah and Sixteen By Sixty Four Media Pvt. Ltd. and is presented by "Everest Entertainment".

The watch such a great combination of Actor, director, producer and presenter we will have to wait till 15th September 2017.
Baapjanma Everest Entertainment Nipun Dharmadhikari Sachin Khedekar Sixteen By Sixty Four Media Sumatilal Shah Upcoming Movie