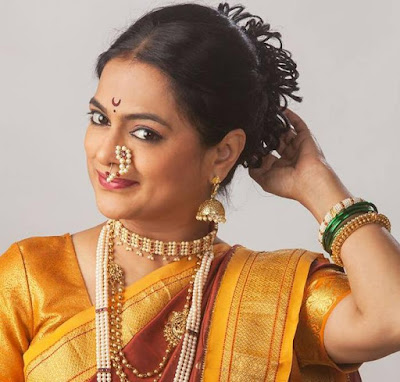 Marathi Actress and a Classical Dancer "Ashwini Ekbote (अश्विनी एकबोटे)" on saturday suffered from a sudden cardiac arrest and sadly passed away, while performing on stage in a play name "Natyatrividha" at 'Bharat Natya Mandir', Pune.

At the end of her performance she suddenly collapsed on stage and after which she was rushed into the nearby Hospital were the Doctor declared her dead. Ashwini's untimely death has left her family, fans and friends from industry shocked. She was just 44 year old.

Ashwini Ekbote was working very actively in all three format of entertainment. Plays, Tv Serial and Films, she will be remembered for her endearing screen presence in television shows like 'Radha Hi Bawari', 'Ganapati Bappa Moraya', 'Duheri' and 'Durva'. she has also worked in films like 'Debu', 'Taptapadi', 'Danyavar Danka', 'Marathi Tigers' etc.